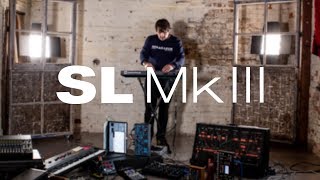 Rated #TOTAL_SCORE# out of 5 based on #TOTAL_NUMBER# reviews.
Powered by
Craig Stuntz

Superb product all around
Ash Day

After a few days of programming it's now the centre of my studio workflow. Expensive but good quality. Only niggles are the loss of info screens over the button/fader controllers from previous SL versions, and the minimal 'InControl' integration with Cubase (the workaround is to dive deep into setting up Generic Remote templates). However, it's the best product available right now that most suits my studio needs, and I can see it remaining so for a good few years to come.
JR

Its an amazing product packed with tons of features, Very easy to use but very, very powerful.
David de los Reyes

It´s probably the best way to centralize hardware and DAW control. My only complain is the feeling that some crucial features (song mode, sysex, midi merge) were left for updates.
Doug Jackson

I'm just learning everything it does and for me its all about 1 thing.... NO AUTOMAP! I am glad that is gone.
pascal gabriel

Great feel of the keybed, great features, great all round studio master keyboard

Included Software
What's In The Box
Technical Specifications - Novation 61SL MkIII
Product Hardware Specifications
Rear Panel & Connectors
Sequencer
Real Time Performance
Editing
Software Compatibility
Power Requirements
Product Dimensions
61SL MkIII: <981mm length x 300mm depth x 100mm height>
Note: Maximum power consumption is required to be screened onto the product next to the power jack and must be consumption and not the specification for the power supply. Format is to the nearest 100mA. Up to 900 write in mA, above 1000 write 1.1A, 1.2A etc.

SL MkIII is the centrepiece that can be used to control your whole studio, working perfectly alongside your DAW. Make working with your hardware easy and creatively rewarding, and construct your next production in the 8 track polyphonic sequencer, with everything staying in sync.
Key features
Absolute hardware control
Bring MIDI hardware and CV/Gate synths together by plugging them all into SL MkIII, taking total control directly from the internal eight-track polyphonic pattern-based sequencer.

Easily integrate hardware with your DAW
Do you use a DAW and crave integrating your favourite hardware? Well, you can have the best of both worlds. Make controlling your software easy by recording productions from a studio centrepiece.

The perfect controller for Live™
We worked with Ableton® to create an absolutely stunning keyboard controller for their Live™ music-making software. The five colour LCD screens give you full parameter feedback, enabling you to see everything you are controlling.

Internal eight-track pattern-based sequencer
Real time record or input notes per step. Play and edit your sequences directly from the keyboard. Record your movements as automation into the sequencer, bringing life to your production.

One routable clock for the whole system
Whether you're in the box or outside the box, the MIDI and analogue clock and transport controls keep everything running in time.

Arpeggiator
Choose an arp type, set a sync rate, tweak the length, and then use the pads to design your rhythms in real time.

Customisable templates
Highly customisable mappings for hardware and software easily control everything. Create your own templates in the software editor, and save them to the keyboard.

LED feedback
Work with scales and keys and set up multiple zones and layers on the keyboard. See everything instantly with vibrant on-key RGB LED feedback.

Comprehensive connectivity
USB; MIDI In, Out, Out 2/Thru; three pedal inputs; Analogue Clock Out; and two CV Pitch, Gate, and Mod outputs can be used to route anything anywhere.

Control all major music software
Your choice of music software is crucial to your creativity. SL MkIII's pads, buttons, eight faders and eight knobs take control of all major music software using InControl. SL MkIII also works with any HUI-compatible DAW.
High-resolution scan
The SL MkIII has an exceptionally high scan rate of 10kHz (10,000 times per second), giving the keyboard a huge dynamic range for expressive keyboard performance.
Keys for the player
The SL MkIII boasts our finest, most playable and expressive synth-style semi-weighted keybed, with a sprung action and our highest scan rate, all tuned to the needs of the experienced player. It's got aftertouch too, assignable to anything.
Selectable Velocity Curves
The Velocity Curves come to you from a Novation engineer who's been designing and playing keyboard controllers for two decades. Choose from a comprehensive selection of Velocity Curves to suit your playing style.
Pads
SL MkIII's velocity-sensitive RGB pads have multiple functions: they can be used for launching clips, as steps in the sequencer, they are perfect for the finger drummer, and have polyphonic aftertouch.
Backlit Pitch and Modulation wheels
Pitch and Modulation wheels have RGB LEDs that change colour to show what track you're working on. Brightness gives you the value of what you're changing.
Components
Components allows you to backup and restore your templates and sessions in the cloud, enabling access from anywhere in the world. All content can also be saved locally.
SL MkIII v1.4 Firmware Update

The features in firmware v1.4 are designed intentionally to bring greater creative flexibility and possibilities to the SL MkIII, and to be a constant source of inspiration throughout your music-making journey. Build complex, generative and endlessly evolving patterns using upgraded and expanded arpeggiators and sequencer functions, plus deeper swing control and creative transposition features.

This SL MkIII update delivers another of the most requested SL MkIII features, along with further stability improvements and bugfixes.

Unquantised Recording
In the previous firmware version, we introduced micro-step editing, allowing users to position notes off the grid for subtle timing variations. With unquantised recording, users have the ability to record into these micro steps. This means that the organic, human quality of performances and punched-in beats can be captured in all their wonky glory.

The firmware for the SL MkIII rewards users' patience with the addition of most asked-for new features and workflow enhancements, making our flagship controller keyboard for Ableton Live (and other DAWs) more powerful and versatile than ever. SL MkIII v1.2 also, of course, squashes a few bugs and improves general stability.

Microstep editing
The Sequencer resolution has been increased to incorporate 6 microsteps per step, enabling notes to be positioned off the grid for the programming of subtle timing variations, fast triplet runs, glitchy repeats and more.

Step View pattern scrolling
The Up and Down buttons can now be used to scroll through all your loaded sequencer patterns for viewing and editing, without deselecting the pattern currently playing. This is of particular benefit to live performers, who can make changes to upcoming patterns on the fly – whether they're in a chain or running individually – before they're actually played.

Assignable Aftertouch
Giving your SL MkIII performances an expressive boost, Aftertouch has been made assignable to any MIDI CC you like within Components. Now you can use key pressure to control anything in your DAW or synth capable of receiving MIDI, from opening a filter or modulating oscillator pulse width, to increasing the depth of a distortion effect or detuning a unison stack.

More responsive knobs
We've increased the responsiveness of the SL MkIII's rotary encoders for deeper, smoother adjustment of parameters over a shorter rotational distance, with no audible stepping.

Increased Gate length
With the maximum step length doubled to 32, you can record and sequence longer MIDI notes within patterns, for more complex and expressive tracks.

Enhanced NRPN Control
As well as outputting the full range of MIDI CCs, The SL MkIII v1.2 now also communicates with all NRPN-enabled devices. Not only does this greatly expand its hardware control remit, it also lets you manipulate viable parameters at higher resolution than standard MIDI allows.

And that's not all, of course! SL MkIII v1.2 introduces plenty more workflow fixes and improvements – fire up Novation Components to see the full list of additions and changes, and download the update.

Ash Day
September 18 2021
After a few days of programming it's now the centre of my studio workflow. Expensive but good quality. Only niggles are the loss of info screens over the button/fader controllers from previous SL versions, and the minimal 'InControl' integration with Cubase (the workaround is to dive deep into setting up Generic Remote templates). However, it's the best product available right now that most suits my studio needs, and I can see it remaining so for a good few years to come.

JR
October 28 2019
Its an amazing product packed with tons of features, Very easy to use but very, very powerful.

David de los Reyes
April 9 2019
It´s probably the best way to centralize hardware and DAW control. My only complain is the feeling that some crucial features (song mode, sysex, midi merge) were left for updates.

Doug Jackson
March 1 2019
I'm just learning everything it does and for me its all about 1 thing.... NO AUTOMAP! I am glad that is gone.

pascal gabriel
November 5 2018
Great feel of the keybed, great features, great all round studio master keyboard
Can't find what you are looking for?
Shop by product type